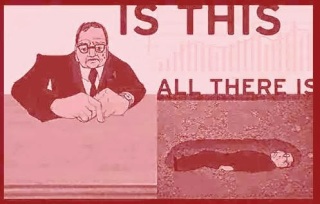 Firstly I am no prophet.

I recently spent a very tedious hour listening to a video from a popular financial magazine which ‘speculated’ on the economic future of the UK. They didn’t call themselves prophets, just ‘informed speculators’. They predicted an economic collapse in Britain. And in the end they offered a handbook for anyone who wanted to know how to protect their money and investments when it all hits the fan (as long as a subscription to their magazine was taken out).

We are in a huge financial crisis and many people are suffering. People are concerned about their jobs and about survival. It’s natural. The only people who are talking about Christian revivals and awakenings are Christians and a few of our Illuminati friends who also want to take over the world (joke). Seriously, it isn’t about wanting to rule the world for most Christians.

But historically, revivals have happened before and therefore they can happen again. You’ve got to be pragmatic. Most people don’t know quite how much past revivals have influenced communities – they have happened when things have seemed so bleak in countries and they have changed things forever for many people.

This is just a blog entry with some of my (possibly naive) thoughts about the subject and I don’t want to go into the definition of revivals or pretend that this is an academic piece. For those who don’t know, I am basically talking about a renewed interest in Christianity among the people of a nation. I am talking about a lot of people becoming Christians all at once and existing Christians feeling and showing the love which Christ talked about.

The mainstream Christian view of revival is that it should be inclusive. I like this version, but true revivals haven’t always been like that. So believers argue with each other about whether a revival is good for the people (and selfishly, whether it is good for us).

Is a revival good for jobs? There is a scene in the Bible in which Paul (arguably one of the first revivalists) is opposed by someone who realizes he will lose his business if a revival happens. So he opposes the movement.

Fast forward 2000 years and this scene is replayed today. There are many people who automatically oppose any kind of renewed interest in Christianity because they fear it will be bad for their business. What would happen to Wonga.com and the pay-day lenders? Or, separately, what about the drugs trade?

It is expected that drug dealers would oppose any interest in Christ because they could lose their customers. Love is bad for business, you see?

So is a revival always bad for jobs? What about the arms trade – a huge employer in this country? Would people change jobs? Or the sex-industry? What would happen to it? If a revival causes more people to be more socially active in causes then who would be the winners and who would be the losers in an awakening?

Some industries would win out. Those in the caring industry would probably find increased resources and workforces. There could be more people attracted to the caring profession. There would probably be more Christian leaders – but it would mean a whole shedload more work for the Christian leaders as their congregations increased (maybe that is why some Christian leaders oppose it too?). The police, in theory (if historical figures are to be believed), would have less work to do with less crimes taking place. Some people would have to work harder and some people’s jobs would get easier. Charities would win out. There would probably be more voluntary workers working for charities as people became increasingly concerned for the many needy people (and animals) in this world. Charitable giving is supposed to increase in revivals.

Would the workforce become more conscientious, making employers happy? Would employers treat their staff better, making employees happy? What about pub landlords? I can’t really see a time (even in a revival) where people will not want to use pubs – because people need an escape in all environments. Christ drank alcohol. I don’t see how this profession would suffer should it ever happen.

Media could be transformed for the better if the media industry had greater integrity. Politicians would suffer as they were challenged more by the people. But most of the people would win out as crime decreased and the atmosphere in the country changed from one of fear and a lack of love to one which was more loving and less prone to violence. Yes, it is simplistic, but these are just some basic thoughts on what is a possibility for the soul of the nation and not a destiny of it.

A revival would be good for Christians. Hopefully it would include all Christians, Catholic, Orthodox and Protestant. And a revival would not necessarily be bad for secularists, atheists or people of other faiths. Think of the debates people would have. Those opposed to faith would have the time of their lives debating the whole thing.

Some people would change their jobs, some people would find jobs, some people would probably lose their jobs. Drug-use would decrease. I think this would be particularly good for the country because no-one asks why people take drugs. There are reasons and usually these are mixed motives (hedonism, an escape, seeking meaning, peer pressure, yet more hedonism). But if there is an alternative – if people feel hope for the future then they will resist the urge to short-termism. The point of asking ‘is this all there is?’ or ‘why was I born?’ is hugely important. These are questions which faith is supposed to be able to answer.

Would celebrities become Christians? Possibly. Would there be signs and miracles? This hasn’t always been the case in revivals but sometimes it happens. We get so much bad stuff happen to us in life that I think we deserve some kind of miracles. But it isn’t my call.

In the end, if it ever happened we could expect the politicians to take the credit for things getting better in the country. But at least this would be hotly debated.

I think it would be inclusive, but it would be inclusive by degrees – some people would be happier about it than others but it would make things better for most people. As people became more socially active and politically enlightened there would also be some radical changes in law. I’m not sure what it would mean for some laws – as there are so many views within Christianity on all subjects. I think there would be more love in the debates. I would guess that each side would be able to debate and that these debates would be more focused on coming to a reasoned solution. But I’m just speculating.

One thing it would do. It would make life more interesting.

Politicians fight against it. Most of the establishment wants it to be taboo. Think about it – what would it mean for you? And if you feel it would be bad for you and your interests would you join the establishment in opposing it?

23 About that time there arose a great disturbance about the Way. 24 A silversmith named Demetrius, who made silver shrines of Artemis, brought in a lot of business for the craftsmen there. 25 He called them together, along with the workers in related trades, and said: “You know, my friends, that we receive a good income from this business. 26 And you see and hear how this fellow Paul has convinced and led astray large numbers of people here in Ephesus and in practically the whole province of Asia.He says that gods made by human hands are no gods at all. 27 There is danger not only that our trade will lose its good name, but also that the temple of the great goddess Artemis will be discredited; and the goddess herself, who is worshiped throughout the province of Asia and the world, will be robbed of her divine majesty.”