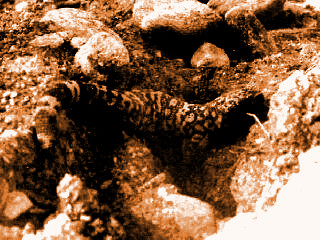 Beware the Beast of Revelation! (or the gila monster in this case).

It isn’t the end of the world. I’ve checked. I think there is hope for your children (should you have children).

Can you see the hubris? I think people purposefully say that the latest disaster or war is significant in an end-times wrap up scenario so that it annoys me so much that I get taken out of myself and write a blog entry trying to debunk the whole idea. I’m that egotistical.

Okay, we do have a revived Roman empire in the EU. Okay, we have earthquakes and tsunamis and wars and recession and crisis after crisis. I admit the news is depressing.

But is saying ‘These are all signs and we live in the very last days – expect the second coming – it could be today!’ really accurate (or responsible)?

There are certain signs which must take place. They are prophecies from the books of Daniel/Revelation and the gospels which must happen before the world ends.

1. Firstly, the temple in Jerusalem has to be rebuilt because it features in Biblical prophecy. It hasn’t yet.

2. Where is the antichrist? He just isn’t around yet. There is no political world leader who is controlling everything. Satan has singularly failed to become a human being so far.

3. Look at the (Ban Ki) Moon (by the way, that was just word-play not an accusation). The moon hasn’t turned as red as blood. Sometimes it is a bit coppery when there is an eclipse. It isn’t as red as blood. I think that the moon will turn red when it gets populated by people and there is a man-made disaster on it (just a thought).

4. Jesus said that the love of many will grow cold. Okay, sometimes people are selfish and greedy and don’t show much love or mercy. But look around, there are plenty of people who show faithful love and who still act unselfishly.

5. The mark of the beast. We may be closer to this with the idea of implants which can be used to buy goods, but we are still a step away from it. It hasn’t happened yet.

There are other prophecies which haven’t taken place yet, these are just five.

Having said this – as most of the world thinks that Jesus will never return anyway, this blog entry is all a bit superfluous. Jesus will return in the future – just not imminently. I don’t think we are going to see another civilisation, for example. And there is not much chance that we are going to see the sun die in thousands and thousands of years. Jesus really is going to return eventually. Just not yet.

If you want some information which will really help you in an end of the world scenario – read the book of Daniel. In this book it says that Edom and Moab will escape the tyrannic rule of the antichrist. They are the ancient areas which correspond to the country Jordan.

So tell your children and your children’s children (if you have them) that should things get really bad they need to run to Petra. Or, even better, to run away to an even safer place (God).