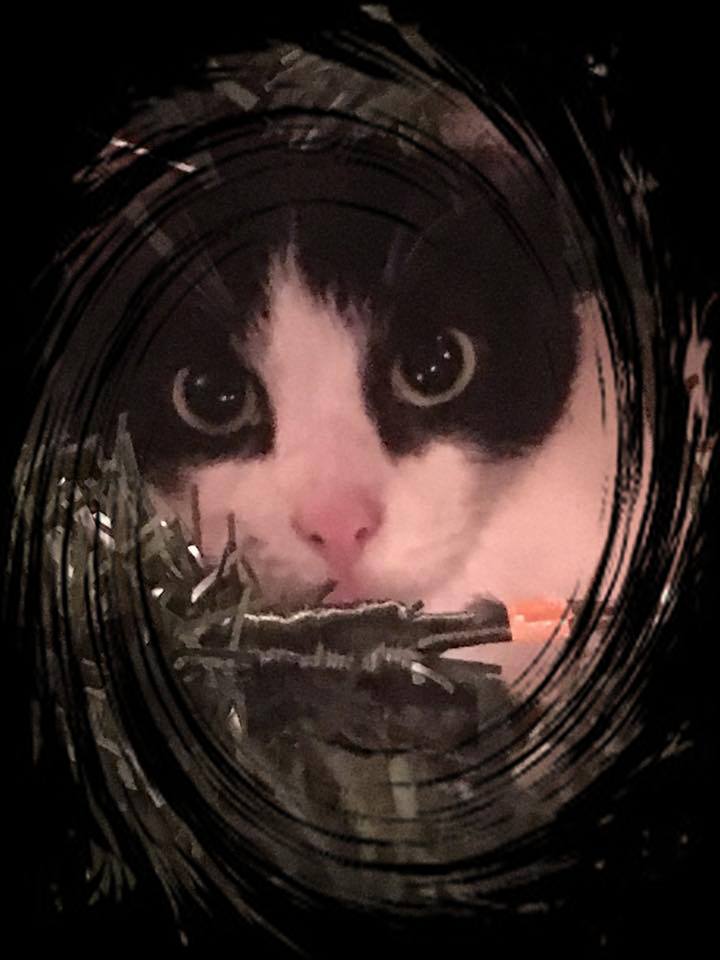 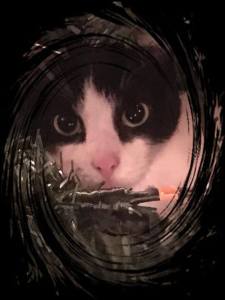 We adopted Ziggy from a cat rescue centre and he was a beautiful kitten. They called him ‘Beanie’ because he was as long as a runner bean. All we knew was that he liked lego and would steal it in the night in his temporary home.

When he first came to us he hid. He hid for three days and three nights. We had adopted two kittens at the same time – Tilly and Ziggy. Tilly would eat and drink and come for fuss, but Ziggy hid under the table. We decided that he was on hunger strike and we worried for him. We tried everything to coax him out, leaving him under the table at night with food, water and treats, but he was having none of it. After those three first days I had one of my too-occasional brain waves and decided to try to play with him with a cat toy on a string. And it worked. Ziggy chased the toy round and round, suddenly full of life, suddenly playful and more than that, eating and drinking and allowing himself to be stroked.

After that we were inseparable. He was such a naughty cat, terrorising Tilly and always sitting on the laptop or getting between our feet. He looked even more like a runner bean as he grew – a cat full of life, who loved treats, who would sit on window sills and talk to the birds in a kind of catty chatter, the meaning of which is only known to catkind. He was such a happy cat and he became very affectionate. There was no cat naughtier than Ziggy – he ruled the house with a face that looked like a fox – I called him ‘fox-face’ because his face reminded me of a drawing I once saw as a child of a fox. And he became my friend. He was so intelligent that he even knew how to turn on taps to drink from them or stash items he liked in hidden places. One evening in winter he made the mistake of jumping onto the woodburner and leapt from it with a hiss. He raced upstairs, jumped into the bath and turned the cold tap on. He was no pedigree, but if cats went to university he would go to Oxford.

We loved him and he was an active and lively cat, able to jump crazy heights when we played with him. He clawed furniture to shreds. He loved play and whenever we got home from work he was always there meowing for food and pestering us as only a cat can. He and Tilly even seemed to form some kind of alliance and the cat code was clearly that the humans should not be let in on their secrets.

We spent three years with him and although he was always thin he showed no signs of serious illness. Even when he got the pollen from some lillies someone had given us around his nose and had an emergency overnight stay at the vets, he was able to bounce back and soon resumed to being a rascal.

We were overprotective of him because so many of the neighbours’ cats had died on the roads. So we took him into the garden on a harness and a lead. He loved that but we knew that he wanted full freedom. He would meow to go out on his lead and his tail would be in the air as he patrolled the garden and chased birds. He tried to jump the fence on more than one occasion. Ziggy’s life was spent in escape attempts, but he was happy enough and he loved his treats.

He lost some weight and we didn’t think too much of it. I took him to the vets and they said that we should monitor him. But soon after that he began to lose strength in his back legs, unable to jump as high as he could before and we didn’t know what was wrong so took him back to the vets. They noted that he had lost weight and that there was a lump in his stomach. We agreed to let them take blood and do an x-ray and that was when we were first told that he may have the wet form of FIP – a lethal cat disease which usually only affects kittens.

We had simply thought that he had swallowed some toy, as he had stashed of toys which he hid under the sofa or elsewhere. But we were told the worst news.

His last days were spent free. When we took him off his harness in the garden he looked up as if to thank us. And he spent his end days chasing frogs, bees and butterflies. We let him stay in the garden as long as he wanted.

Slowly he began to get a pot belly from the wet FIP which filled his stomach with fluid as shown by the x-ray. The lump was a gland and we were told that FIP has no cure. We requested pain relief and were given three doses of morphine for him. There was no way that we wanted him to suffer. His appetite was good up until the end, but he slowly grew more depressed, unable to jump and play as he used to do. Only Ziggy could get a rare cat disease like FIP. Tilly seemed to know what was going on and let him eat first and stopped scrapping with him.

He was sick in the night once but lived for a few weeks after diagnosis. His symptoms were depression, jaundice, a pot belly and weakened back legs. He began to walk with a stagger. On the final night we gave him some morphine, on top of some butter which he licked away. We were unwilling for him to be in pain. But he was a brave cat. The FIP was so quick to progress and we knew that we didn’t want him to suffer. So as soon as we could see that he was in pain and that it would only get worse we took him back to the vet who agreed that we should put him down.

It was such a sad and dark day for us, but there was much of the old Ziggy left and fox-face remained himself till he crossed the rainbow bridge.

Which I believe he proceeded to claw into shreds.