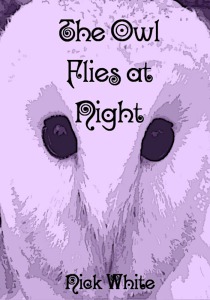 An update for my long-suffering blog readers:

The winter hasn’t been entirely spent in hibernation. The novel (which has a working title of ‘Destiny and Dynasty’) is progressing and should be published (one way or another) later in the year.
In the meantime I’ve written and published a short story called ‘The Owl Flies At Night’ as an ebook.
It’s a short story which I’ve sat on for quite a few years. Originally it was going to be part of my novel, but it didn’t fit and I thought it worked better as a standalone story. I’ve used a few writing tricks and experiments, there is an unreliable narrator and I’ve also experimented with frame stories. In the end it has turned into a story within a story within a story (and that is on-purpose). I had a lot of fun with this one and it was enjoyable to write but I suppose the test will be to find out what people think of it.
Here are the details and the blurb:
‘Owl Flies at Night is a satirical short story about Dr Eric Swell and his adventures on the astral plane. As Dr Swell once said, ‘It is your destiny to read this.’ Dr Swell maintains that having an out of body experience is just like riding a magic carpet and that negative astral experiences don’t exist. You can trust him can’t you? Surely we can all trust him.

Just look over your shoulder now and sense your spirit guide nodding in approval as you read these very words.

Learn the identity of Narcissus. Free yourself from dogma. Find a story within a story. Do not doubt Dr Swell. He is entirely reliable and his words are like a light at the end of all our tunnels.

This is a sample of Dr Swell’s best work, his magnum opus. It is a work which will herald a paradigm shift in the world’s collective consciousness.

We all have a destiny.’

I wanted to publish the story for free as an Amazon ebook, but the platform doesn’t allow that so I have priced it at the lowest price. So I’ll try to use as many free promotions as Amazon allow.
Please do check it out if you can. Here is the Amazon link.
Advertisement